Force of Nature is a slot game from the game developer Leander Games, inspired by weather phenomena such as earthquakes, thunderstorms, tornadoes, and floods.

During the base game, the reels are set in a lush and peaceful tropical environment. When any of the special weathers are triggered, the scenario changes dramatically. This is amplified by a change in the background sound, from tranquility to drama.

Examples of important symbols in this game are wind, water, and the erupting volcano. 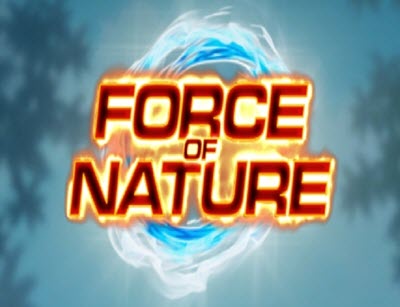 The games are available in online casinos that feature games from Leander Games.  This includes Jackpotcity Casino, Dunder Casino and Spin casino.  All 3 of these are well managed honest casinos that offer good customer service and a great selection of games.

The Force of Nature logo

The wild symbol is an intricate tile that can also pay out coins in its own right, without acting as a wild. If you get five wilds on a payline, you win 50x the bet.

The tornado feature can trigger on any spin and will blow a number of symbols from the reels and replace them with new ones.

The earthquake feature can trigger on any spin. The entire screen will start shaking, and two random reels will shatter and become full-height wilds.

The flood feature can trigger on any spin. The water will sweep in, and then leave trails of wild symbols in its wake as it retreats. 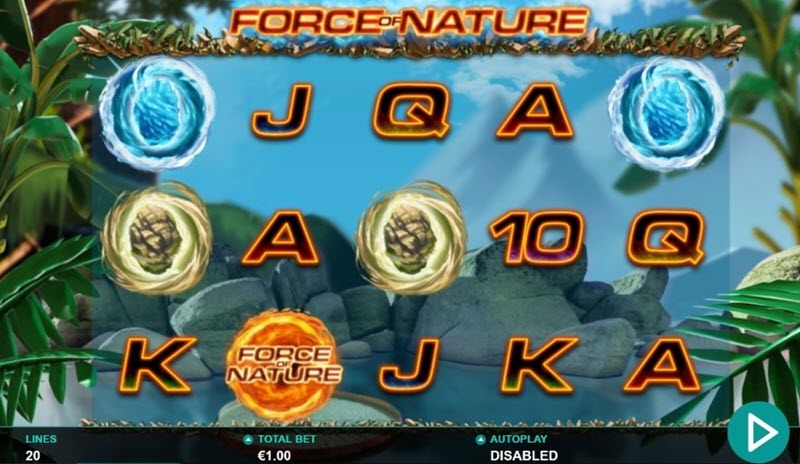 The green tile adorned with a twister and the text Free Spins is a scatter symbol.

If you get scatters on the first, third and fifth reels simultaneously, it will trigger the Thunderstorm and you will be awarded 10 free spins. The screen will darken, and rays of lightning can hit the wild symbol if it appears during free spins. After being hit by lightning, the wild symbol will get sticky and stay in place for a random number of free spins (1-5).

Wild symbols can not appear on the fifth reel during the free spins round.

Leander Games was founded in 2008.

The company is headquartered in Buenos Aires, Argentina.

Examples of well-known slots from them are Ave Caesar, Afterlife: Inferno, Bandida, and Alice Cooper.