When the surface of the Earth shakes due to a sudden release of energy in the lithosphere that creates seismic waves, we call it an earthquake.

The word earthquake can be used for both natural and man-made seismic events. A vast majority of all earthquakes are natural, but certain types of human activities, such as mine blasts and nuclear explosions, can also cause earthquakes.

How common are earthquakes?

With the sensitive equipment we have today, we can detect even earthquakes that are so mild that humans don’t notice them. This equipment show us that roughly half a million earthquakes occur each year on our planet. Out of those, about 100,000 are strong enough to be felt by humans.

What’s the difference between hypocenter and epicenter?

What are geological faults?

A geological fault is a a planar or gently curved fracture in the rocks of the planet’s crust, where compressional or tensional forces cause relative displacement of the rocks on the opposite sides of the fracture. The largest faults are caused by the actions of plate tectonic forces.

How large are faults? 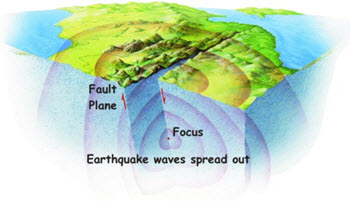 When it comes to the displacement, the range is also great, from less than a centimeter to several hundred kilometers along the fracture surface.

In some parts of the world, numerous individual faults are located in the same area, forming fault belts that can be hundreds of meters wide.

The largest faults are the ones that form the boundaries between the tectonic plates. This includes both subduction zones and transform faults.

A majority of the earthquakes on our planet are associated with rapid movement on active faults.

As long as the plates can glide gently, we don’t feel their movements. Sometimes friction and rigidity makes a plate stop, keeping it from gliding along. As other plates keep pushing on the stuck plate, stress builds up. Eventually, the pressure becomes stronger than the forces that have been keeping the plate in place, and the accumulated potential energy is then released.

Strain can occur instantaneously or cumulatively, depending on various factors, including the liquid state of the rock. The upper crust is brittle and tend to react with an instantaneous stress release that results in motion along the fault. The lower crust is much more ductile and accumulate deformation gradually through shearing, but a fault in ductile rocks can release stress instantaneously under special circumstances when the strain rate has become large enough.

Examples of human activities that can cause earthquakes: