Below you will find a few examples of earthquakes that occurred in El Salvador.

We do not know much about this earthquake, but contemporary sources describe it as a violent earthquake that caused severe damage. It left the city San Salvador in ruins and also impacted surrounding communities.

The epicentre was at 13.31°N 89.34°W, which is in the Pacific Ocean, roughly 60 km southeast of the capital San Salvador. In San Salvador, the intensity reached MM VII.

The earthquake was powerful enough to be noticed in Guatemala, Honduras, Nicaragua and Costa Rica.

The shakings triggered many landslides.

The most affected cities were: 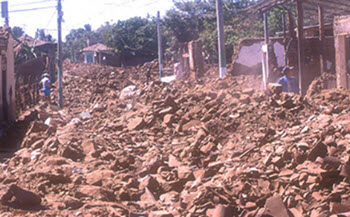 This 5.7-moment magnitude earthquake had its epicentre near the capital San Salvador and caused considerable destruction in that city and surrounding communities. On the Mercalli intensity scale, it was graded IX (violent) for San Salvador.

A majority of the destruction took place in El Salvador, but there was also some impact in Honduras and Guatemala.

In addition to damage caused directly by the shakings, the earthquake also triggered landslides in the San Salvador area.

The reported death toll varies from one source to another but typically stay in the 1,000 to 1,500 span. Roughly 10,000 injuries were reported, and an estimated 200,000 people became homeless.

The shallow depth of the earthquake, only 10 km, contributed to the massive destruction. In the San Salvador area, poorly built shanty towns were especially prone to damage, but more expensive and centrally located buildings were also affected, such as the Children’s Hospital. 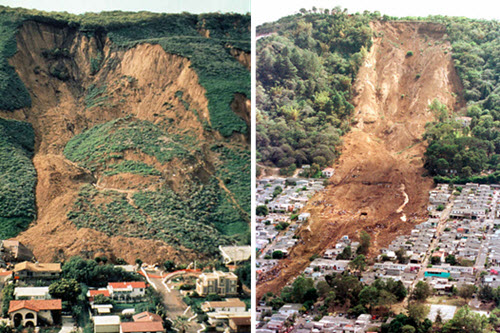 There has been some discussion about the magnitude of this earthquake, but most sources agree that it was within the span 7.6 – 7.9 Mw. The depth was roughly 60 km.

The quake was powerful enough to be noticed from Mexico City in the north to Colombia in the south.

A majority of the death and destruction occurred in El Salvador, but Guatemala was also impacted, with eight fatalities reported from that country.

Many municipal systems for potable water were destroyed and the risk of disease outbreaks increased sharply, especially since desperate people began to scavenge in places still containing fresh human remains.

Tens of thousands of people were living outdoors after the event, either because they had become homeless or because they were afraid of moving indoors again – a fear boosted by frequent aftershocks.

On 15 January, a 5.7 aftershock occurred in El Salvador.

As of 2 February, more than 2,500 aftershocks had been recorded, some of them causing additional damage.

As El Salvador was still desperately trying to cope with the effects of the massive earthquake in January 2001, the country was hit again by a major earthquake on 13 February at 14:22 UTC. This was 08:22 in the morning local Salvadorian time.

This time, the moment magnitude was 6.6, and the epicentre was on land, at 13.67°N 88.93°W, which is roughly 30 km east of San Salvador. With a depth of just 10 km, this earthquake was much more shallow than the one in January.

The quake was felt throughout El Salvador and also noticed in Honduras and Guatemala.

315 deaths were reported in El Salvador, along with 3,399 injuries in the country.

Landslides occurred in many places of El Salvador.

This 7.3 Mw earthquake had its epicentre off the coast of Nicaragua but caused three deaths in El Salvador and damage to buildings in the Usulutan department. Two of the deaths were due to heart attacks, while the third fatality was a man killed by a falling electrical pole in San Miguel city.

The earthquake occurred on 14 October 03:51 UTC time, which corresponds to 13 October 21:51 in the evening local Nicaraguan time.

After the earthquake, parts of El Salvador experienced power outages and problems with mobile phone services.

For more information, visit our page about Earthquakes in Nicaragua.