Below are a few examples of notable earthquakes that have taken place in Nicaragua. 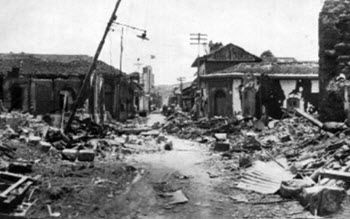 On 31 March, during the Easter Week celebrations, Nicaragua’s capital Managua was badly damaged by a 6.1 Mw earthquake. A major part of the destruction was caused not by he shake itself but by fires that broke out right after, including a large one that continued to burn and spread until the next day, destroying thousands of buildings in its path.

The reported death toll vary. In some sources, it is as low as roughly 1,000 people. In other, it is higher, in some cases up towards 2,450 dead.

The markets were extra busy since it was Easter Week, and 65 females and 17 males were found dead at the various markets in the capital.

At least 45,000 people were made homeless by the earthquake and the subsequent fires. 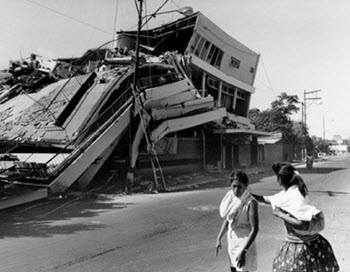 The earthquake had a magnitude of 6.3 Mw and a depth of circa 10 km. The maximal intensity on the MSK scale was IX (destructive).

The epicenter was 12.18°N 86.22°W, which is right in Lake Managua; the lake by which shore the city is located. The distance between the epicenter and the city center was just 28 km, and a lot of homes and other buildings were situated much closer to the epicenter that this.

The death toll vary significantly from one source to the other, with most estimates landing somewhere between 4,000 and 11,000 fatalities. Approximately 20,000 injuries were reported, and over 300,000 people became homeless.

The most severe damage took place within a 27 square kilometer area, including a 13 square kilometer zone within which most buildings were destroyed. Managua’s central business district, where several tall buildings were located, sustained a lot of damage. You can still see remenants of the damage done in the old city center and in the area close to Pharaoh’s Casino and sportsbook Carretera Masaya. The area around the casino is quickly being developed and in a few years, all signs of the earthquake will be gone from this area.  There is still no plans to rebuild the old center.

Within an hour after the main earthquake, two notable aftershocks occurred: one at 5.0 magnitude at 01:18 local time and then another slightly stronger one just two minutes later, reaching a magnitude of 5.2.

Nicaragua received a lot of foreign aid after the earthquake, but president Somoza and his cronies took a lot of it for their own use. When this embezzlement became apparent, it helped fan already existing opposition to the regime throughout all levels of the Nicaraguan society. In 1979, it culminated in a revolution where Somoza was overthrown.

Much of Managua’s city center remained in ruins until the 1990s. By then, it had lost its position as city center, as commercial, political and cultural focal points had formed in other parts of Managua. To this day, Managua lacks a clearly defined city center and consists of several hubs. 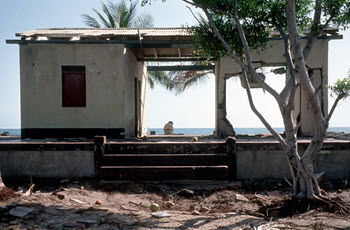 This 7.7 Mw earthquake took place on 2 September at 00:16 GMT (18:16 local time), and created tsunamis that were disproportionately large for its surface wave magnitude. The epicenter was at 11.742°N 87.340°W, which is off Nicaragua’s Pacific coast. Depth: circa 45 km. This was the first major tsunami earthquake in the world to be captured on modern broadband seismic network.

The initial quake was followed by several powerful aftershocks.

The earthquake was most widely felt in the departments León and Chinandega, both located on Nicaragua’s Pacific coast. To a lesser degree, the quake could also be noticed in other parts of Nicaragua, including Managua.

116 fatalities were reported, a lot of them children who died in their beds.

Roughly 13,500 people became homeless because of the earthquake and tsunamis. In addition to the many damaged buildings, 185 fishing boats were destroyed along the coast, together with fishing equipment and storage sheds. A majority of the destroyed homes were small and simple ones located very close to the shore. Many fishing families lost both their home and their livelihood.

A lot of the death and destruction associated with this earthquake was not caused by it directly. Instead, it was the result of the tsunami waves that swept in over the Pacific coast of Nicaragua and Costa Rica.

Due to the absence of sediment on the ocean floor, the slip that occurred on the subduction interface between the tectonic plates Cocos and Caribbean propagated an up-dip all the way to the trench bottom. This is what created the big tsunami waves.

Measurements taken shortly after the earthquake indicate tsunami waves with a height of up to 9.9 meters in some places, but the average height was 3-8 meters, depending on location.

Most of the relief operations were handled by Nicaragua’s National Civil Defence. Some of the injured could be treated at the hospital in Leon, while others were transported to the Lenin-Fonseca Hospital in Managua. 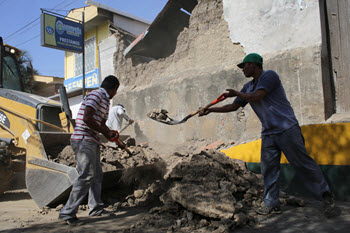 With a moment magnitude of 5.4, this was a comparatively small earthquake, but it still caused 7 deaths and over 40 injuries. 357 houses were destroyed and another 1,130 were damaged. Some of the destruction was due to landslides triggered by the shakings.

The quake took place on 6 July at 19:30 UTC. It was preceded by a 2.0 magnitude foreshock one minute earlier, and followed by many aftershocks, including one on 7 July that had a magnitude of 5.2, i.e. nearly as powerful as the main event. The strongest of the aftershocks caused significant additional damage; they weren’t very powerful but had a shallow focal depth which made them extra destructive.

The epicenter for the main event was at 11.884°N 85.988°W, which is south of the city of Granada, between the large Lake Cocibolca and the small crater lake Laguna de Apoyo. In parts of the Laguna de Apoyo zone, the shakings reached VII and VIII on the Mercalli intensity scale. In Masaya and Managua to the north, it was just a VI event.

The earthquake, which was of the strike-slip kind, had a depth of roughly 33 km.

7 deaths were reported, plus 42 injuries.

357 houses were destroyed and another 1,130 were damaged. Many of the damaged or destroyed houses were small and poorly built houses inhabited by households with scarce economic resources.

A majority of the destruction occured along Laguna de Apoyo’s northern rim. The shakings caused several significant landslides along the sharp slopes of the crater lake. 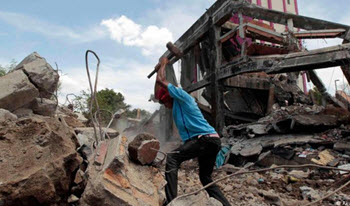 On 10 April, at 17:27 local Nicaragua time, an earthquake occurred with the epicenter located roughly 50 km north of the capital Managua. The quake was a 6.1 on the moment magnitude scale and reached a maximum Mercalli intensity of VI (strong).

Only one fatality was reported, plus 266 injuries.

The most affected area was the town Nagarote and its surrounding communities in the Leon department.

Less than a day after the 6.1 earthquake that occurred on 10 April, Nicaragua was stirred up by another, even bigger one. This one occurred at 15:29 local time and measured 6.6 on the moment magnitude scale. It was especially strong in Granada, but did not result in an fatalities in that department, nor anywhere in the country.

On 14 October 03:51 UTC time, a 7.3 Mw earthquake occurred in Nicaragua. It had its epicenter off northern Nicaragua’s Pacific coast, not far from the border to El Salvador, and approximately 42 km west-southwest of the Nicaraguan town Jiquilillo,

Local Nicaraguan time, it was still 13 October and the clocks showed 21:51 in the evening.

Areas in both Nicaragua, El Salvador and Honduras were impacted by the quake, but the damage was limited.

3 fatalities were reported from El Salvador. A man in the city of San Miguel in El Salvador was killed by a falling electricity pole. The other two deaths were due to heart attacks.

Some buildings in the Usulutan department were slightly damaged.

Parts of the country suffered from electrical outages and a lack of mobile phone service.

All in all, approximately a dozen aftershocks were recorded.